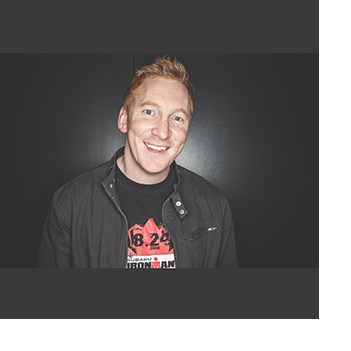 Graham Sherman is a self-professed “high level geek” who has used his love of technology to help him master the craft of brewing artisan beer. Together with his partner, Graham launched the Tool Shed Brewery in 2013, and has never looked back. Speaking on what it takes to be a successful entrepreneur, Graham’s passion comes through in every talk.

Prior to starting Tool Shed, Graham and his Tool Shed partner worked on contracts for the Canadian and US governments and military forces, installing encrypted, tactical communication networks. By day, they rolled around Afghanistan in armoured vehicles, “geeking out” in the world of satellite communications. By night, they aimed their obsessive, high-level thinking at mastering everyday tasks such as coffee, learning to control their homes in Canada remotely with their iPhones, and finally, perfecting batches of beer.

Now sold in over 1000 locations in Western Canada, Tool Shed has its 15,000 square foot headquarters in Calgary, and the team behind the brand has also been nominated as Canadian Entrepreneur of the year, the world’s most prestigious business award for entrepreneurs, with programs in 145 cities in 60 countries. They were also named as two co-winners of the “40 Under 40” recognition from Avenue magazine.

After hearing Sherman’s story and insights, you’ll walk away incredibly inspired and with a clear path to unleashing your own disruptive behavior to transform your business.

Members are free to purchase electricity services from a retailer of their choice. For a list of retailers, visit http://www.ucahelps.alberta.ca or call 310.4822 (toll free in Alberta).